The  participants  are  required  to  design  and implement a pattern recognition system able to classify a whole HEp-2 specimen image. Each specimen image belongs to one of the following  pattern  classes: homogeneous,  speckled,  nucleolar,  centromere, golgi, nuclear membrane and mitotic spindle. 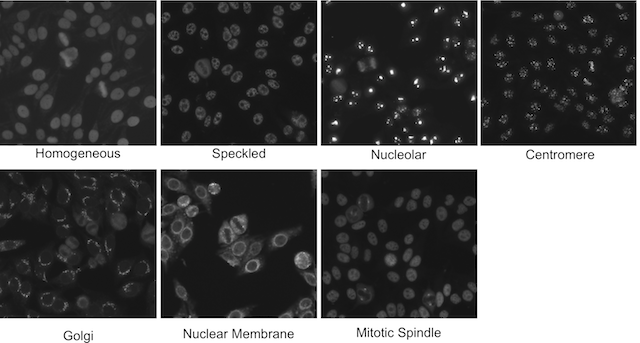 For each specimen to be classified, the system receives as input four images taken at different locations of the specimen and the respective segmentation masks together with the intensity level information (positive or intermediate). The segmentation mask contains all the object present into the specimen, thus not only the cells in the interphase but also cells in mitosis and artifacts (air bubbles, etc).

The dataset was acquired in 2013 at Sullivan Nicolaides Pathology Laboratory, Australia. It was collected from 1001 patient sera with positive ANA test. Each patient sera were diluted to 1:80 and the specimen was photographed using a monochrome camera fitted on a microscope. Each specimen was photographed at four different locations rendering each specimen has four images. The dataset has seven pattern classes: homogeneous, speckled, nucleolar, centromere, nuclear membrane, golgi and mitotic spindle. The first four classes represent common ANA patterns whilst the rest three classes are less common.

The dataset is divided into training and test set as following: approximately ¼ sera in the training set and the remaining in the test set. All images are in monochromatic uncompressed format with resolution 1388 x 1040 pixels together with their corresponding cell mask which was obtained automatically.

The labelling process has involved at least two scientists who read each patient specimen under a microscope. A third expert’s opinion has been sought to adjudicate any discrepancy between the two opinions. Each slide image is also provided with the corresponding class (one among the patterns defined above). Furthermore, all the labels were validated by using secondary tests such as ENA and anti-ds-DNA in order to confirm the presence and/absence of specific patterns.

Each specimen image contained in the database is annotated with the following information:

The application obtaining the highest value of the mean class accuracy in specimen classification over the test set will be declared as the winners. The proclamation of the winners will be made during the contest session at ICPR 2014. The contest session will be held as one of the sessions of the I3A Workshop.

Iconic One Theme | Powered by Wordpress